This weekend I finally got some time to sit down and play a little Heartstone: Heroes of Warcraft. The game is in beta, but it plays very well. This game also is the first time I used the Battle.net game client. The Battle.net client is simple and works great. It allows you to manage any games you've purchased through Blizzard such as World of Warcraft, Diablo III and Starcraft II. I only own World of Warcraft and, now Hearthstone, but hey, it works!

The game download is about 1.3GBs, so it only took a 10-15 minutes to download and get installed. Before I go further I must admit that I suck at card games, so that's why I put off installing and playing the game for about a week or so. The only card games I've ever played are Pokémon and the World of Warcraft card games (which I was terrible at). I never really got into card games, they just didn't interest me. The idea of card games sounded boring and slow. Wizards, magic, spells, stats, and strategy is definitely not my thing.

Hearthstone: Heroes of Warcraft may not be your traditional card game, but it's definitely a lot of fun, and I really enjoy playing it. The game starts with a tutorial of sorts. It shows you how to play your cards, how various types of cards work and how Hearthstone in general works. If they hadn't included this I'd probably have given up and uninstalled the game already. Hearthstone only took me about 10-15 minutes to understand and pick up. Essentially you have a hero (who is Jana Proudmoore to begin with) and minion cards whom fight for you. There are also other cards you can utilize to boost your stats or cast spells or restore health. 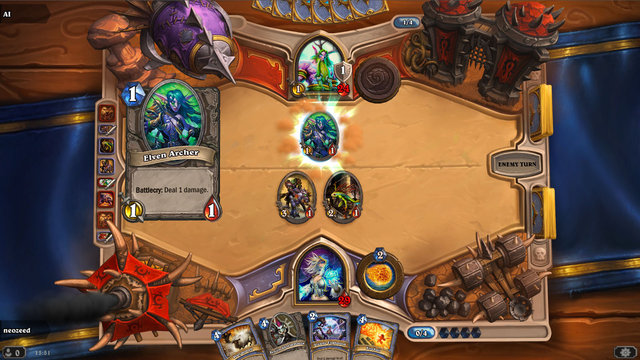 Once I made it through the tutorial I had a look into the store. You can purchase card packs to help build your collection. Each pack comes with 5 cards, one of which is guaranteed to be rare. Purchasing a pack during the beta also entails you to a special card from Blizzard as a thanks. I ended up getting 7 packs ($9.99) which seemed like a fair price to me; I didn't pay anything for the game, so I figured spending $10 on something I actually liked wouldn't hurt! After purchasing your packs, you get to virtually un-wrap them! Fun, I know!

Once I had unwrapped my 7 packs, the game brings you into your collection of cards. From here you can manage your decks and create custom ones. You can create decks per class as well. I quickly made what I thought was a good deck and gave a shot at playing against another human. I was quickly annihilated. Regardless I got some experience points and leveled up. One thing I am not sure about is if you gain more HP for your hero while leveling up or not, I guess I should pay more attention. 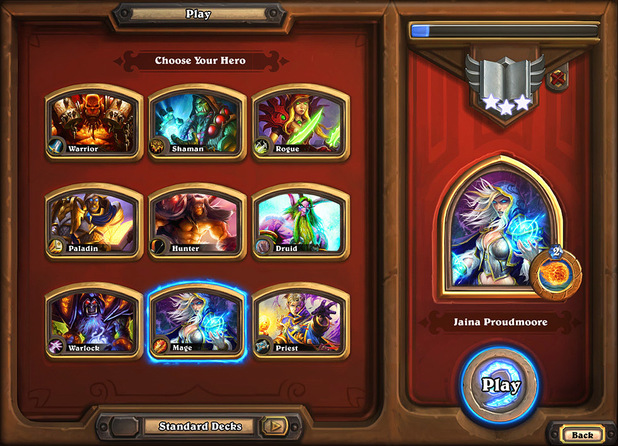 Besides playing against real humans you can also go into Practice mode which lets you play against the computer. I find this to be useful in that I can level up my hero, as well as unlock new heroes and gain new cards. The game also has quests which you can complete to unlock new cards and goodies.

I've played about 5 matches with real humans so far, and unlocked the hunter class hero Rexxar. I've only built a single Mage class custom deck, but I attribute this to a lack of time to do much more. I certainly will continue to play Hearthstone: Heroes of Warcraft and may even drop another $10 for a few more card packs. For someone who generally dislikes card games, I find myself to be quite interested in this one. I have a feeling people similar to me, those who really enjoy Warcraft but aren't into card games may find themselves surprised at how fun Hearthstone is. I think not having a monthly fee to play also really helps me enjoy the game a lot more then say World of Warcraft (even though I do enjoy WoW). I'm excited to see how the game progresses as I suck less and less and as the game becomes more mature.

If anyone out there is playing, let me know! 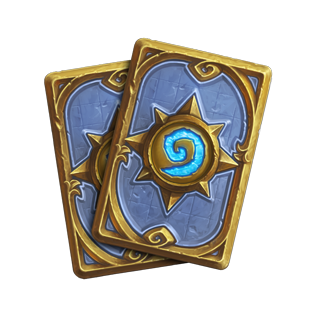