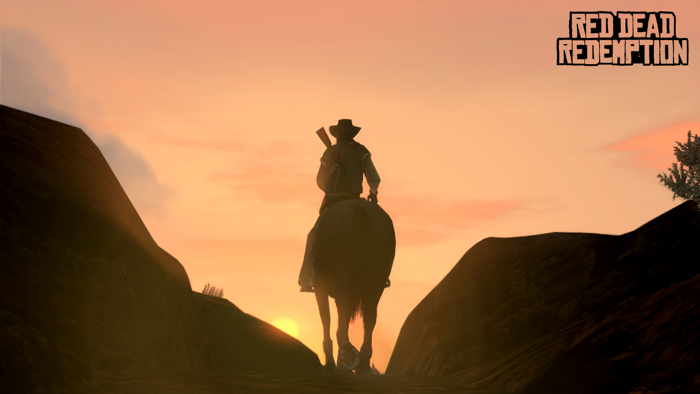 Please just make another Red Dead Redemption. How can you not, with the way the first one ends. It's just screaming, "MAKE A SECOND ONE!!!". Please, I beg of you Rockstar...

I am a Hoarder

There I said it...alright, I'm not the typical hoarder you're probably thinking of with junk and knick knacks to the ceiling of my house. I don't have rotting food in my fridge, at least there wasn't any last time I checked, and I don't have storage units full of stuff. I simply hoard video games. I came to this realization just the other day when I was browsing through all the games I had amassed over the years. While my physical collections only take up a small book case, I have hard drives and servers full to the brim of games. I have games from the 90s I haven't even touched. I am so far behind on the games I want to play.

This past year I even put together a website to help me catalog and organize my games so that I knew which ones I had finished playing, which ones I didn't want to play and the ones which I was currently playing.

After seeing how many games I had to work on and finish I simply got too overloaded and I started to really panic. How could I conceivably finish these games in one life time? Well...I guess I could completely cut myself off from the world and just work on these games every free moment I had. However, I could definitely kiss my girlfriend goodbye, possibly my job, and I would likely resemble Jabba the Hutt shortly after going down that path.

After thinking about it for a while, I thought to myself, "Do I really need to play all these games?". Probably not. I'd gotten this far in life without having played them, so what difference would it make if I just skipped out on them? Certainly games that got poor ratings and reviews could be skipped. Some unlucky soul had already done the dirty work for me, I definitely didn't need to waste my time just to say, "Yep, that was a horrible game!". That at least allowed me to go through some of the games on my list and remove them immediately. Some games that I wasn't too sure about, I popped into my Xbox or whatever console the game was for and played for 15-20 minutes. Usually that's enough time for me to figure out if the game is worth playing or not. Using that method I managed to scratch off about 20 games or so.

Unfortunately even after using that method I still have over 150 games on my list. I guess I better get cracking because I'm not ready to let these go. I can't yet bring myself to not experience something which may have one of the best story-lines ever, or some of the most breath-taking graphics. With Xbox 720 about a week away from being announced and Playstation 4 coming this fall/holiday season, I've really got to get playing.

This is one of our favorite apps for doodling on iPad. My girlfriend refers to it as the sketching game. The update includes pinch and zoom features, a better ink rendering tool and some new social features. I'll snag the update when I get home and play around with it when I get a free minute.

I finally ditched Clear as my on-the-go mobile hot-spot. I picked up a Karma which ironically enough runs off the same Clear network which is actually Sprint. The biggest difference is that it's a pay as you go, no monthly contract required, and most interesting to me, 'social bandwidth' device. The device itself is actually the same device I was using with Clear, simply rebranded with the Karma logo.

The biggest reason for switching was that I was over paying and Clear had some of the worst tech support ever. For almost $60 a month, I better be getting some decent support when I need it! They've been worse then useless though when it comes to that. Karma first caught my attention through a story on Digg.com and after looking at what they offered I knew switching would be the best thing. No contract, pay as you go and earn more bandwidth for free by sharing with friends? Sounds like a no brainer to me! Let's just quickly mention that even though you can "earn" bandwidth by sharing your hot spot with anyone, you can also buy bandwidth at $14 for 1GB. It's a bit pricy but it never expires and you can purchase more when you need it.

The ability to earn more bandwidth simply by sharing your WiFi connection with anyone is what really sold me though. I can simply turn on my little device and anyone (up-to 8 people) can connect to it for free. Anyone who connects will be prompted to create or login to an existing Karma account and will be given 100MBs of free bandwidth. That should be enough for anyone who needs to make a Facebook post, or a tweet, or send a few emails. In return for me sharing my hot spot, each new person that connects will give me 100MBs of free bandwidth! It seems like a win-win for everyone.

The hot-spot itself is $79.99 and they give you 1GB free bandwidth, plus the 100MBs for signing up for a Karma account. The Karma or rather Clear network is relatively decent. I usually get between 3-8MBits down and about 1Mbit up. I have seen speeds up to 10Mbits which is nice. I tend to only use the device for low-key things like surfing the web, Twitter, sending emails, maybe watching a YouTube video or two. Overly, I am much more happy with my little Karma. I like being able to share the WiFi-love and get a little reward in return.

The only reason I wouldn't recommend a Karma over something from Sprint, or AT&T or Clear themselves, is if you're a heavier bandwidth user. I used to go through about 15-20GBs of data a month, and at that point the Clear unlimited data plan was a much better choice. Since I don't have Netflix anymore and I try to only use the computer when at work or home, I don't rely on the mobile hot-spot as much. I definitely highly recommend this little gadget. It's fun!

I can't even tell you how many blogs and online journals I've had. It's been a while since I've actually maintained one however, at least one that is mostly text. Life got busy and I just didn't have time to actually sit down and write out articles. I found that Twitter and Tumblr were a lot easier on someone with a busy schedule. Sending a tweet here and there only took a few seconds or posting a few quick images to Tumblr was much easier then actually sitting down and taking time to flesh out articles.

I don't necessarily plan on writing large articles but it would be nice to put together a few things which are longer then 140 characters. Honestly some things in life are better said in more then a short tweet. I plan to mostly use this site to brain dump things I've been working on or just various little things happening in my life. You can still check out the images which I update from time to time with some images I enjoy.